The W.B.F. White & Sons Building is the canvas for the gorgeous, historic mural of Richlands. This public artwork was completed in 1984 by Ellen Elmes after much  research, design, and painting. Commissioned by the Town of Richlands & the Virginia Commission for the Arts, this work is still a centerpiece of the town today. The name was decided by a contest through the area schools and was revealed at the dedication service for the mural: The Past That Makes the Future Better.  Below you will find a list of the many sections in the artwork and the symbolism behind them. 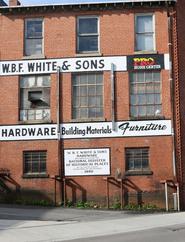 Renovation of the 1890 structure owned by Higginbotham and White, resulted in the oldest continuous business in Richlands. W. B. F. White took control of the business around 1907, and moved his family to the second floor. Brothers Roy T. White and John C. White; and sons Jesse F. White, and Joe M. White joined the W. B. F. White & Sons business, followed by grandson James S. White, who last managed the business. The hardware building was sold by auction in 2001 to Charles Lawson, great-grandson of W. B. F. White. He opened Clinch Valley Millworks and the building was used for that until it closed in 2012.

The Story Behind the Mural 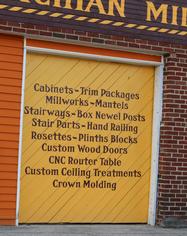 Travis Hackworth, owner of Twin Enterprises, purchased the W.B.F. White & Sons Building in February of 2015. Seeing the need for a quality millworks supply, he opened Appalachian Millworks & Cabinetry to produce custom cabinetry, trim, flooring, and other millwork needs. Twin Enterprises is known for building and remodeling homes with  custom millwork, flooring, and cabinetry and had previously used Clinch Valley Millworks which was the previous owner of the building. We have hired some of the former employees that were familiar with the equipment and shop.